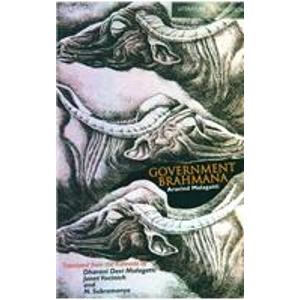 About the Book
Government Brahmana is the English translation of the Kannada autobiography of Aravind Malagatti. The autobiographical narrative is in the form of a series of episodes from the author’s childhood and youth. These episodes function as what G.N. Devy calls “epiphanic moments” in a caste society. The author reflects on specific instances from his childhood and student days that illustrate the normative cruelty practiced by caste Hindu society on dalits. We encounter all the tropes of (male) dalit life: is isolation in school where even drinking water is an ordeal; life in the village where dalits perform the filthiest tasks but are denied access to common wells, lakes, where they cannot step into shops and therefore have their purchases thrown at them, where they have to cut their own hair because no barber would touch it; consuming dead-animal meat and innards; doomed love affairs with `upper’ caste women. A painful, disturbing, thought-provoking memoir, this text is conversely full of vitality, even tenderness. In its structure and purpose – as a series of notes towards a dalit autobiography – Government Brahmana appears to be anticipated by Ambedkar’s own autobiographical sketches.

Contributors (Author(s)/Editor(s)/etc.)
Aravind Malagatti’s Government Brahmana is the first Dalit autobiography published in Kannada. It received the Karnataka Sahitya Academy Award, A well-known Kannada writer, Aravind Malagatti has written and published prose, poetry and criticism. He is also a folklore scholar. He has founded Dalit organizations and has been an activist in the Dalit movement.l He is now Professor of Kannada, Kuvempu Institute of Kannada Studies, Mysore University. Dharani Devi Malagatti is a writer and critic. She received the Karnataka Sahitya Academy Award for her poetry in the year 2004. Janet Vucinich is a social scientist. She now works in a community college in Santa Fe, New Mexico. N. Subrahmanya translates from Kannada to English and from English to Kannada. He lives in Mysore.